This white paper, "Creating Equal Learning Opportunities" was written by one of the commercial partners who support Manaiakalani Schools.

For several years ACER have supplied the Chromebooks the students use and it is a tribute to the strength of the partnership that they have taken the time to understand the 'Why' rather than focusing on the commercial 'What'.

ShakeOut I LockDown I MeetUp 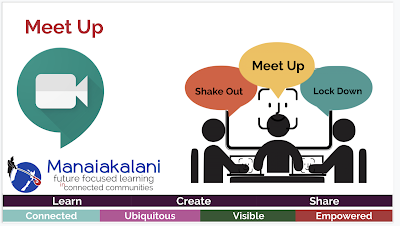 We're proposing a new drill for schools that are fortunate enough to have their learners attending in person:

It's well past time we included regular MeetUp practices. These should be designed to support success in the event of further requirements to stay home and learn via remote learning.

Over years schools have been required to have regular
In October 2020 we proposed that Manaiakalani Schools add regular MeetUp practices to the raft of eventualities for which we prepare our young people.
When our schools were first closed for COVID-19 in March 2020, schools preparedness for the move to remote learning varied. Perhaps the most common area of variance was video conferencing. This included the teacher confidence to host it and the learners understanding of protocols and procedures to enable a successful connection for learning.

By October, with Auckland schools having been through two seasons of remote learning, it became obvious that anyone with the luxury of learners sitting in the same room should be taking the time to practice using video conferencing effectively for remote learning. We suggested that teachers and principals maximise the opportunity to observe barriers to access, which in turn become barriers to learning and lead to isolation during distance learning.

Recommendations for a MeetUp include:

This week Matt Goodwin and Fiona Grant from the Manaiakalani facilitation team released an entertaining and informative blog post to support learners (and teachers) to "follow a good Google Meet etiquette".  They included a poster of prompts to support a successful Google Meet.

** Disclaimer, of course, that this is assuming learners have a device and connection to the internet at home

Posted by Dorothy at 9:45 AM No comments:

COVID 2020 through the eyes of our young people

Adults have had plenty to say about the impact of the pandemic on our young people, and we are delighted to hear our tamariki speak for themselves on the subject.

In term 4 all Manaiakalani schools contributed movies to our annual film festival. These were created at the individual, class or school level.  We continued to use our umbrella theme, taken from the New Zealand Curriculum vision statement

"Our vision is for young people who will be confident, connected, actively involved, and lifelong learners."

Approximately one-third of the entries were centred on their response or reaction to the COVID pandemic and how it impacted them personally.   One delightful example is this music video, 'Stay at Home', written and performed by a student from Tamaki College.

We are grateful to the team from N4L who took the videos made by our tauira and compiled a short film to allow our young people to speak for themselves.  This video weaves together excerpts and voices from across the 13 Manaiakalani schools....

Preparation for the annual Manaiakalani Film Festival takes the best part of a year, so when we went into Level 4 lockdown in March we were in a quandary. With everything else going on, was this something we would give a miss in 2020?
Our principals made the call to go ahead with planning the festival, in the hopes that the situation would have improved by November and it could be a face to face event, but with the proviso, we would move it to an online event if we were still required to social distance.
Our teachers and learners rose to the challenge and continued to plan their movies to contribute to the Film Festival and as it turned out we were able to host a face to face event. There was a palpable feeling of celebration as the busloads of children and teenagers arrived at the theatres and appreciated being able to see themselves, or the movie they had created, on the big screens of the three theatres we hired.
While we were slightly down on the number of movies contributed (85), we still had more than 3,500 young people attend the 12 hour festival and a full house attend the evening showcase. Around one third of the movies had a definite COVID theme, and the rest were our usual eclectic interpretation of the mission statement of the NZ curriculum and showcased confident, connected, actively involved, lifelong learners.
We altered our traditional style of welcome video to represent a year of distance learning through Google Meet, and re-enacted a Meet session. This brought back warm memories to all who had taught or learned in this way in 2020.
As always, the movies screened are available online at our film festival website and we invite you to view 2020 through the very positive eyes of the Manaiakalani tauira.
Posted by Dorothy at 12:36 PM No comments: 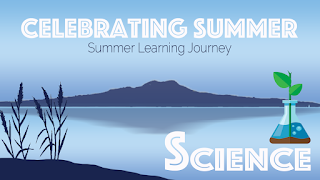 The Manaiakalani Summer Learning Journey, covering the summer holidays of 2020-2021, was launched on December 14th with a full six week long programme of activities, including Christmas Day and New Year's Day. This has been designed to support the young people in Manaiakalani schools over the long break, where traditionally learners who are not exposed to stimulating opportunities experience the Summer Slide ie go backwards academically.

The theme for the current SLJ is 'Celebrating Summer' - something we were all desperate to do after the events of 2020. The activities are designed to be fun, as well as providing opportunities for learning along the way.

This year the design team chose to use a blog format for the activities, rather than the website approach used in previous years. This enabled us to design fun activities in strands, with a focus on STEAM, and to schedule new activities to appear throughout the day. This 'drip-feeding' is particularly engaging for young people with time on their hands and not a lot else planned for their day.

We were very fortunate to have Dr Michelle Dickinson – a.k.a. Nanogirl- and her team offer to partner with us and enrich the Science strand of the SLJ. Nanogirl designed science activities for our learners that kept in mind the limits of available resources on hand for children in our community. These have been enormously popular.

The activities created can be viewed here.

We were delighted to see an article appear on the Stuff website on January 7th reporting the contribution Nanogirl and team are making to celebrating science and making it accessible to all young people. 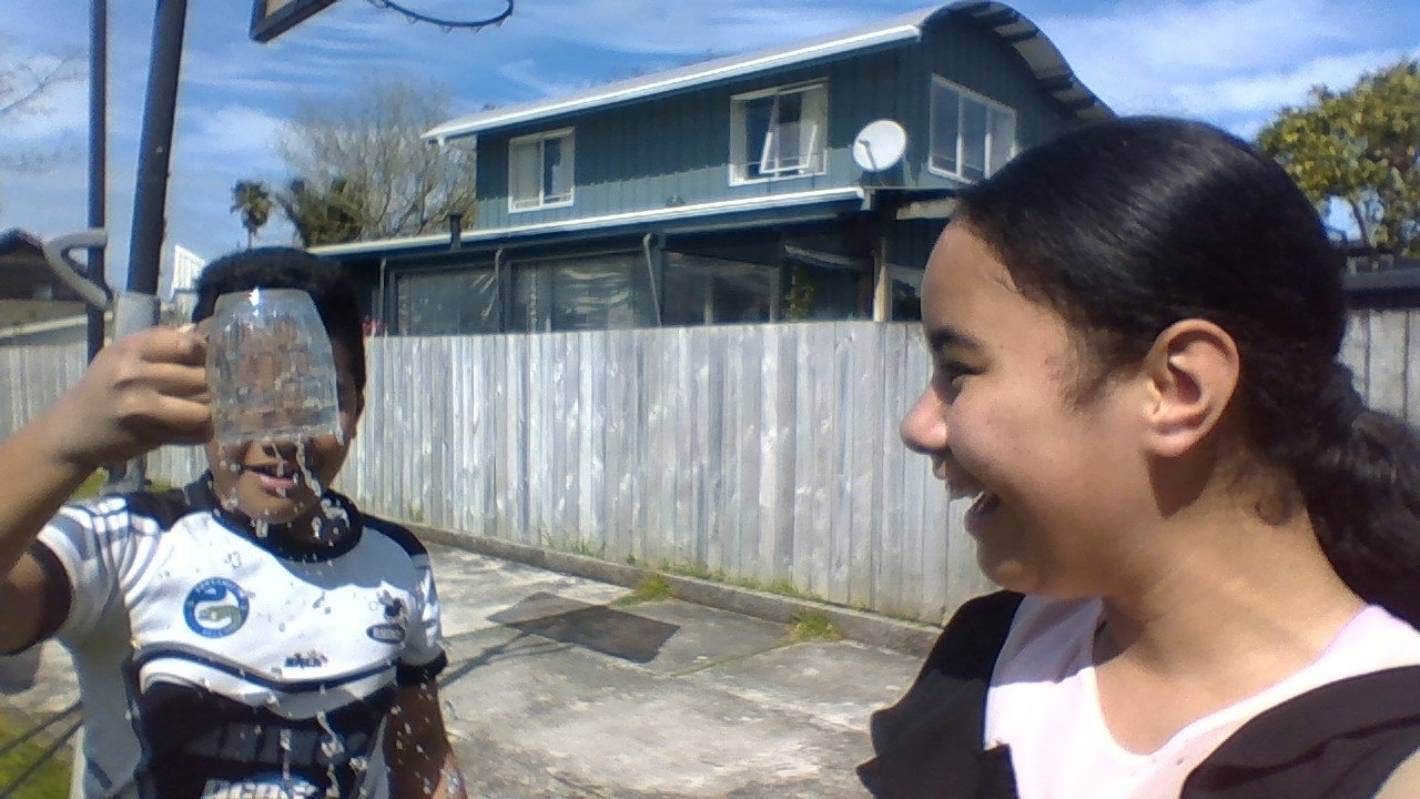 The full article as it appeared on Stuff follows:

Dr Michelle Dickinson – or Nanogirl, as she’s perhaps better known – is a pro at getting children excited about science on a shoestring budget.

But when she launched Nanogirl's Lab during lockdown, beaming experiments into children’s homes, she realised that some of them didn’t even have string.

Or paper, or tape, or scissors.

Five hundred students from 12 schools across Tāmaki, Glen Innes and Panmure are spending their summer holidays taking part in a Nanogirl programme, doing a new experiment each week at home.

Knowing that many of them might struggle to access basic tools at home, Dickinson helped pack hundreds of boxes of stationery to make sure a lack of resources didn’t stop anyone taking part.

The programme is an expansion of a 50-student pilot run earlier in the year, which gave Dickinson insight into some barriers to STEM for kids in low socio-economic areas.

Eleven-year-old Finau Fileta from Auckland’s Pt England school is one of the students who took part.

She said she liked it because all the experiments used objects she already had at home, like kitchen roll tubes, serving spoons and bowls.

“You didn’t have to buy expensive stuff.”

She said she felt more confident with science after doing lots of experiments at home.

Check out some of Finau's blogposts sharing her science experiments here

Manaiakalani, the cluster of schools involved in the programme, already have digital access sorted, so the students upload photos and videos of their experiments to their school blogs.

One student’s reluctance to blog during the pilot made Dickinson consider the messaging for the summer programme.

He didn’t want to post his video for an experiment about weight because he had used cans of spaghetti, and he was embarrassed about people seeing what he ate at home.

So the summer programme features a video at the beginning about how everything in your house is useful, “and it’s great that you’re resourceful”, Dickinson said.

Nanogirl is a social enterprise, and the summer programme for low-decile kids is funded through a ‘buy one, give one’ model. But that doesn’t mean it's the same as the subscriptions available off the shelf.

“We never do things that are generic for high-risk groups – it’s always customised.”

A lot of the time when they’re working with low-decile students, that means going offline because families don’t have internet access.

Not having scissors at home is one challenge, but the biggest barrier to kids getting into science is that they’ve made up their mind by about age 12 – and at the same time, primary school teachers are saying they feel ill-equipped to teach science.

There’s also a lot of intergenerational fear around maths and science, she said – when a parent tells their child they were bad at maths and hated it, it gives the child permission to not try.

To tackle that attitude, they include parent cheat sheets with every programme, so parents know what to ask their kids and can answer their questions.

It’s the feedback Dickinson gets from kids that makes it worthwhile, she said. “It's enough to make you cry.

“The kids come to us and say I never thought I could – but now I realise I can.”