Having made the decision about which services to offer your school, the next step is to decide whether to bite on the bullet and transition everyone at once, or whether to test the waters with a few user accounts first.

"You can move everyone to the new infrastructure today, or you can try out the new account services with selected pilot users"

We went for the selected pilot users option and moved a few teachers, a handful of students and some random accounts set up for subject areas.  When you begin the transition Google offer you an email that they have created to send out to the people being moved to explain what was occuring. We accepted that offer - may as well see the reaction of the pilot users when they get that in their email inbox over the weekend!


The result was a mixed bag as most of the users had conflicting accounts and they had to work through thay process by themselves.  The feedback from them clarified where the rest of the school would need support.  And that is what led me to this series of blog posts and movie tutorials.


The first concern to me was that a small group of users were unable to be moved at this time - and that included me!  It appeared that the one thing we had in common was that we have signed up to a lot of public Google services using our school domain email.  We are still "on hold" today, waiting for them to sort us out.  It seems that we can sort this ourselves though if we follow these four steps:


Step 1: Visit www.google.com/accounts and sign in with your personal Google Account
Step 2: Click "Change email" under "Personal Settings"
Step 3: Enter a different email address where you can receive mail, enter your password, and click "Save email address"
Step 4: Check your other email address and click the link in the verification message from Google to confirm your change

With the knowledge we had gained so far we made this next video and showed it to the staff to give them an idea of what was to come...

More Services Available to your School

Behind the scenes, the adminstrator(s) of your Google Apps for Education account have received notification that your school account is going to be transitioned to the new infrastructure.  And they have the choice of doing it at their own pace, or leaving it to Google to action early this year. 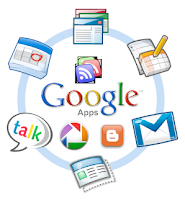 We decided to do it ourselves, and began the process by selecting which services of the 61 on offer we would make available to the school community.  We chose 3: Blogger, Picassa and Google Reader.  We will add more as teachers request them, but thought those were enough to get our heads around initially.
The briefing for account administrators includes:

Why is this good news?  For one thing, once you sign in to your Google Apps account you now have these extra services available to access seamlessly without have to alter sharing permissions and you don't have to sign in again. For another, our students are all under legal age to own public Google accounts and so they can use these services without the teacher having to set up class accounts under their own name.

The video below is a screen capture and walk through of what it looked like when I explored this signed in as an administrator.
Posted by Unknown at 2:05 PM 2 comments:

Having made the decision to transition our Google Apps accounts, we decided to do a little homework - including reading the manual! Or at least working through some of Google's help sheets and videos.
The most important thing for us was getting our head around the dreaded 'conflicting accounts" and how that would impact our users. We are not a big domain with only 500 accounts, but at least 400 of them have conflicting accounts and no-one wants to be the help desk for 400 people when they discover things are no longer how they should be.
There is a perfectly intelligible video from Google at the bottom of this post which gives their perspective on conflicting accounts, but let me give you mine.
Long before we moved to Google Apps for Education I had signed up for a number of Google Apps to use at school. My list included Docs, Sites, Blogger, Picassa, Reader, iGoogle etc. I used my @ptengland.school.nz email to sign up. It was so easy and once I had signed into one of them in a session the whole lot were available.
Then we moved to Google Apps in 2008 and now I had an account inside our Apps domain with exactly the same email address. And it all worked fine once you got it sorted that when you signed in using the green box you were inside Google Apps, and when you used the blue box you were in your public Google account. It would even let you have both accounts open in the same browser - as long as one was a public (blue) account and one was a Google Apps for Ed(green) account. 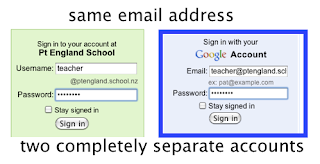 Warning: after the transition, I would no longer be able to use my school email address to access my public Google Account. Fair enough. And Google has a process to talk you through the first time you try to sign in. Sounds easy to anyone reading this blog, but there are lots of adults - and 350 children - who might finding the warning screens and 'helpful' emails incomprensible if not scary.
The next scenario is the children at the school. They all have a personal blog that is owned by the school (ie the Admin account) but they are able to Author their blog through a class sign in, set up by the school - and this is a public Google account. So they will find themselves confronting this too the first time they try to post to their blogs. And even more, they will no longer be able to have their Google Apps account open and their Blog open on the same browser. They are used to having different tabs open and flicking between them. This will create a conflict and no longer be allowed.
So we put some thought into how we could prepare for this before beginning the transition.
More about that next post...
Posted by Unknown at 5:30 AM 4 comments:

In 2008 we became a school using  Google Apps for Education .  This means that Pt England School set up our  domain with Google Apps for Education ie we signed on with Google and became an account holder using the domain name ptengland.school.nz.  This free service for schools allows the account administrators to choose Apps from the limited list made available. We are able to
...all hosted on Google's servers at Google's expense.

"Google Apps for Education offers a free (and ad-free) set of customizable tools that enable faculty, staff and students to work together and learn more effectively."

We had a very gradual introduction experience, with the early adopters piloting the use of Google Apps initially. Next we added all teachers, then we added class accounts for the students to share (eg room29@ptengland.school.nz). Finally after 18 months we provided the students with individual accounts, set up for us by Hapara.

We also introduced the Apps gradually, leaving email till the teachers had become used to Docs, Sites etc.  We have found this process remarkably smooth and have enjoyed the collaborative opportunities created by this cloud based learning and teaching environment.  So much so that we discovered an urgent need to give the students 1:1 access, as you have read much about in this blog.
Recently the Admin Dashboard has been displaying a notice that our Google Apps account would soon be transitioned to a new infrastructure.  The selling point seems to be that we will have the opportunity to add dozens more Apps to our domain account and we will only have to sign on in one place to access them all. For anyone who has had the frustration of having a separate account for Blogger, Picassa, Google Reader etc etc this seems like a great idea.
It is a great idea, BUT ... there's a catch.  For those of us who have used the same email address (ie our school email address) to sign up in many places we are now going to have conflicting accounts to deal with. More about that next post.
We were being offered two options; to work through the transition process ourself in our own time OR to have Google do it for us when 'they' decided to.
We chose to work through it at our own pace and I decided to write a series of posts documenting the process we are going through as a school.
The video below is from Google explaing why this is a great idea.  I particularly love the Admin guy sitting at his desk throwing Apps into the keepers and ignore piles.
Posted by Unknown at 5:19 PM 3 comments: